Scotland’s currency – what are the choices? 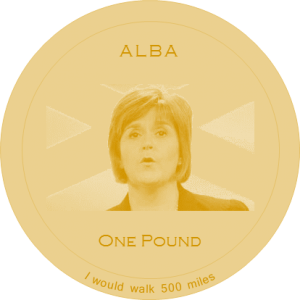 With a referendum on Scottish independence back on the agenda, what are the options for Scotland’s currency?

In the 2014 referendum debate, one of the No campaign’s central issues was that Scotland did not have a currency that would be suitable. If there’s to be another referendum, then this will flare up again. So what are the options? Commonspace lists nine options for Scotland’s currency, but many are hybrids of other suggestions. It really comes down to three, with nuances.

This might mean two things. Montenegro uses the Euro but is not part of the European Central Bank. This means it has no powers to issue Euros, and its banks need to borrow Euros from the Euro Zone to facilitate any financing. This is one option for Scotland, but it has many limitations, not least that it has no representation on the body that controls the currency.

Joining the Euro Zone is another option, if Scotland is to join the EU. But that, presumably, would be some years away.

The advantage with joining the EU and using the Euro would be that trade with other EU countries would not be hampered by exchange rate uncertainties, and that access to finance would be simpler. On the other hand, it would make trading with Scotland’s biggest trade partner, the UK, more difficult.

As with the Euro, using the pound might seem simple, but there would be no control over monetary policy. Scottish banks could not issue debt and if the economy weakened, as Greece’s did in the Euro Zone, debt repayments would become unaffordable. Compare that with the UK which can simply create more pounds to repay its debts.

The SNP proposed a currency union with the UK for a post-independent Scotland. But the UK said that was not on offer. Whether or not something could yet be brought about remains a subject of debate. But the official line is: No.

The “Scottish Pound” could be issued by a new Scottish central bank. It could be fixed to the UK pound, as per Ireland before it had to break parity in 1979. A number of currencies around the world are similarly pegged to the US Dollar. This would make trade with the UK almost seamless but would mean the Scottish Government intervening to maintain that parity at all times. Currency speculators might choose to take advantage of market conditions from time to time to force the parity to be broken.

Some even suggest a fully dematerialised Scottish Pound, or a Scotcoin. This could either be a simple digital currency or it could be a fully self-sufficient cryptocurrency like Bitcoin. A Bitcoin-inspired currency would need to be modified to work in an environment where banks can create new currency as debt and the government can create it using Quantitative Easing. But it’s an option.

The uncertainty about currency is going to plague the independence debate, possibly to the extent that some will avoid voting for independence because of it. Even if the Yes campaign states its preferred option, there will always be arguments against.

So the Yes campaign needs to have a route map. This might include negotiations about a UK currency union with a default to a Scottish Pound (or Scotcoin) should the discussions fail to provide a positive outcome.

« Income Tax or VAT?
Lord King: Scotland could be independent »