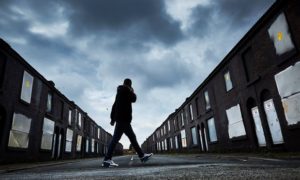 Britain is in the midst of the weakest growth in living standards in at least 60 years,

with low income families faring the worst, a leading thinktank has warned.

Weak earnings growth, together with changes to taxes and benefits, will lead to a rise in inequality by 2021-22, according to the Institute for Fiscal Studies (IFS). In a new report on living standards, poverty and inequality, the IFS says incomes for the average family will not grow at all over the next two years.

The IFS calculated that average household incomes will be 18% lower in 2021-22 than could have been reasonably expected in 2007-08, before the global financial crisis took hold of the economy. It means a childless couple would be about £5,900 a year worse off than they might otherwise have been, rising to £8,300 for a couple with two young children.

The IFS said it amounted to the most sustained slowdown in income growth since comparable records began in 1961. Campbell Robb, chief executive of the Joseph Rowntree Foundation, which funded the report, urged the chancellor Philip Hammond to announce measures to support struggling families in next week’s budget.

The problem in a nutshell

The UK government has implemented “austerity measures” since 2010. This means cutting spending rather than tax rises, including some controversial cuts like a cap on benefits per family, the reduction in working tax credits, the means testing of child benefit and the introduction of a “bedroom tax”, penalising those in rented council accommodation with spare bedrooms. At the same time, the government has introduced “universal credit” to replace a number of separate benefits, which still has variable elements to it based on dependents and housing. But this is only slowly being introduced, initially new to new claimants. Andrew Robb at the IFS gives this advice to the Chancellor: “An excellent start would be to ensure families can keep more of their earnings under the universal credit.”

It’s not simply less money going to low-paid and unemployed that has resulted in the fall in UK living standards. Inflation has started to rise, fueled by the fall in sterling since the Brexit referendum.

While pensioners have been largely protected from inflation and have safe incomes, warning lights are coming on at the other end of the spectrum. The article states “Child poverty is projected to rise from 27.5% in 2014-15 to about 30% in 2021-22”. Although there are many ways of quantifying poverty, including relative measures where some will always be poor, the IFS know more about these than most, and in the 21st century we would have liked the trend to have been downwards rather than upwards. “Tax and benefit changes planned for this parliament explain all of the projected increase in absolute child poverty between 2014-15 and 2021-22.” said the IFS’s Andrew Hood.

Although the title sets out UK living standards as the object of inquiry, the word “inequality” appears a few times in the article. By this, the IFS appears to mean income inequality. And they say income inequality is set to rise after a few years of falling. But while income inequality might mean something for those just managing, where small fluctuations in income mean the difference between going without or buying a new pair of socks, wealth inequality is just as important for people who want to get out of poverty and use their savings to buy property or fund their futures. Wealth inequality has continued to rise, as can be seen in this piece of analysis from the Ripped off Britons blog.

But is the solution one which the government should provide? Or is the government the cause of rise in poverty, income inequality or whatever measure we’re using to illustrate our point? Some think tanks will tell you that free markets are the solution to poverty. Indeed the Adam Smith Institute uses the slogan “Using free markets to create a richer, freer, happier world.” on its front page. Others, such as this blogger, compares a free market in wealth to a game of Monopoly, where the wealthier charge the less wealthy increasing amounts of money just for being in the game until either the losing player tips the board over or retires bankrupt. On the other hand, if the government were to ensure that everyone had enough money to survive, would that eradicate poverty or simply reduce economic growth eventually making us all poorer? The world is trying to figure that one out, following 30 years of Keynesianism and 30 years of Neo-liberalism, each ending in stagnation. The current flavour is a populist, protectionist discourse epitomised by Vladimir Putin, Donald Trump and to a lesser extent the Brexit debate and Scottish nationalism, although each would say they had nothing to do with any of the others. Whatever economy emerges in the next few years as the most successful will be the model for others to follow.

One policy idea which is gaining momentum is Universal Basic Income, whereby everyone receives an equal handout from the government regardless of circumstances. Some organisations such as Basic Income UK campaign for it. Its appeals to both right and left because while it’s still a handout, work will always bring in more money. A connected idea is Helicopter Money, which is new money rather than tax revenues being (re-)distributed. It was an idea that the UK Labour Party promoted for a short time as QE for the People (QE4P). Although new money in this case would have been used to pay for infrastructure improvements, still improving the lives of everyone though. Because UBI is tax revenues being redistributed, tax increases would be necessary to pay for it. But as for most people it would be their own money coming back to them, the regime could be made very close to tax-neutral. QE4P, however, requires quantitative easing (aka printing money) and is, by definition, inflationary. It is analogous to taxing cash.

Some kind of increased redistribution clearly has to be done, as more inequality leads to more social unrest and in a democracy parties promising to reduce inequality will eventually win elections. My own preference is to tax property wealth, preferably via a tax on unimproved land values. There is an element of this already in UK taxation, called Council Tax, but it is capped at a maximum amount meaning the wealthiest pay only very little compared with their net worth. If this can be used to provide a Universal Basic Income, perhaps both income inequality and wealth inequality can be tackled simultaneously.