Universal Basic Income – Can we afford it? 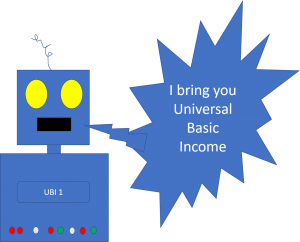 To pay UBI – a basic income to everyone – tax rises are inevitable. But it really is just smoke and mirrors!

The principle of UBI is simple. Everyone, regardless of their age, ability or employment status receives an equal payment from the treasury or local authority. Its advocates, like me, say that it eliminates benefit fraud while making sure work always pays. It also future-proofs the nation from the job-destroying benefits of an increasingly automated workplace. Its detractors believe it encourages people not to work and they are concerned by tax rises to pay for it.

How much will UBI be worth?

It’s not hard to put a figure on UBI. I spent nearly an hour working out what I think it should be. In practice, the Chancellor and hundreds of civil servants will do a somewhat more thorough job.

Currently the UK spends an annual £264bn on benefits. The number of people who receive these benefits is harder than we might imagine to work out. Do we include the 7 million receiving child benefits, and the 12 million receiving a state pension? Do we include working tax credits in the calculation? How much double-counting is there when taking into account people on multiple benefits? I’ll let the experts work that out. I’ve assumed that the UK has 29 million tax payers out of a population of about 60 million, implying up to 31 million receive benefits of some sort. This is an over-estimate as it includes partners of working people, for example. But bear with me.

If we divide £264bn by 31 million we find that the average personal benefit is about £8,500 per year. This might seem rather high, especially for those on JSA or Universal Credit, but it does have housing benefit included in the total, currently paid to the landlord as social rent. Moreover, it gives us a figure to work with.

It also means that with a UK population of around 60 million, the UBI bill will be about £511bn, nearly double the current benefit bill.

Assuming we don’t dip into additional deficit spending, the additional amount of income tax required to afford UBI is fairly easy to work out.

If we assume that every taxpayer has to pay their proportionate share of this, with a total personal income of £977bn that equates to an additional 25% on all tax bands.

Someone earning £10,000 would benefit a lot, because they pay £2,500 to receive £8,500. But higher earners would suffer, with the sweet spot at £34,000 (i.e. where the additional tax equates to the level of UBI). This suggests that a UBI of £8,500 is probably a little generous, or that the tax burden should be on the lower tax bands, with the sweet spot being closer to the current basic rate threshold of £12,500.

Note: The £977bn appears to come from taxable income declared to HMRC. It ignores all those who receive very low income or don’t declare their income. Under UBI, they would be required to if they are to receive it. Consequently £977bn should be higher and the figure of 25% lower.

Edit: I am grateful to Martin Farley for bringing to my attention the Green Party’s proposal for a Citizens’ Income. Although using older data, the comparisons remain largely valid. Here, pensions are treated separately and special benefits are stripped out of the UBI calculation and retained as special benefits. The Greens assume a lower basic rate of UBI at £4,160 (cf my raw average) at a total cost of £161.1bn. To this they add a further £35bn for children, £8.5bn for lone parents and £115.6bn for pensions, making £320.8bn. With retained benefits of £67bn this brings their benefit bill to £387bn. This is still less than the £511bn I calculated above, partly because while pensions cost approximately the same, their basic UBI is much lower, saving £170bn. If I subtract this figure from mine, and add their child UBI figure of £35.6bn I have £376.6bn, which is very similar to their £387bn.

Similar models have been published by the RSA and

A radical change to the tax system

Readers of my blog will know I favour a Land Value Tax (LVT). Couple this with the removal of a number of other taxes like council tax and stamp duty (or LBTT in Scotland) while flattening the income tax bands and we get a whole new tax system. I won’t repeat the arguments for LVT here, but they go beyond simply raising another tax because we can.

Let’s assume that we have a flat tax on all income, and we have a tax on every square metre of land. Working with the same figures as before, let’s assume a flat tax of 32%. Why 32%? Because it’s the basic rate of tax (20%) plus the rate of National Insurance Contributions (NICs, 12%). This raises £312.6bn, a little less than the current Income Tax and NICs take of £335.8bn. It’s only because we’ve removed the basic rate threshold that stops this figure becoming much lower. We will also need to add in a figure of £335.8bn – £264bn = £71.8bn, because that part of income tax goes to pay for other government spending, which will presumably need to continue.

What happens when we tax land instead? The UK has a land area of 242,000 Km2, so that implies £1.12m LVT per Km2, or £1.12 per square metre. Clearly it will be a fraction of that in uninhabited areas but much much higher in Mayfair.

If we also want to afford the current capital taxes and property taxes, £30.6bn and £61.7bn respectively, the LVT charge becomes higher, by about one third. This seems reasonable.

This is a simple calculation. It does no more than illustrate what can happen and what the costs are. Clearly UBI won’t cover all benefits. Some people need special assistance, for example. And most taxpayers won’t be interested in receiving a UBI payment as such, and will net off its effect in their PAYE tax code.

But what this suggests to me is that within a tax neutral model, it is entirely possible to move to UBI. The additional taxes might look scary under the first model, with a 25% increase, but there are clear flaws in the calculation.

In the second model, I’ve flattened tax to 32%, with freeholders essentially taking over from where higher rate taxpayers left off. It’s a view.

I don’t see any government any time soon doing any of this. A recent discussion on LabourList indicates that the Labour party is looking into it, as indeed it is looking into LVT. But I don’t predict anything on the scale of my calculations here.

The answer to “Can we afford it” is: Yes. But whether the country is confident enough to make the change is another question, and its answer is probably No as things stand.

« Why new council housing is right for the UK
Tory stamp duty cut could cost first-time buyers twice as much as they save, leading think tank says »