Capitalism and Socialism in a Democracy 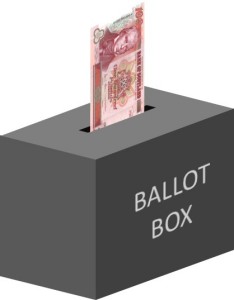 We live in a democracy that hovers around some kind of centre ground between capitalism and socialism.

With an electoral system that works like a tug of war between two parties, advocating more of one and less of the other, and both believing they are right, is there a model where the two could comfortably co-exist? I believe, hypothetically at least, that there is. And democracy plays an important part of the thinking.

First, what would capitalism and socialism in their pure forms look like?

Pure capitalism means valuing capital – money and other monetisable assets – above all else. There should be no government interference in the processes of exchange. Markets dictate the value of everything. This sounds like anarchy so in practice, the purest form of capitalism requires a minimal degree of government to make sure that crimes against property if not the person are punished or prevented. Put differently, theft isn’t allowed in pure capitalism and that includes taxation over and above that required to maintain order.

Democracy is no friend of pure capitalism. Milton Friedman wrote about this saying “…I also believe … that a democratic society, once established, destroys a free economy”. He foresaw a situation where people exercised a majority vote to redistribute wealth, thus destroying his free market model of a fair society. Or as George Bernard Shaw one wrote “A government that robs Peter to pay Paul can always depend on the support of Paul.”

It is of passing interest to note that the free market economics of Friedman’s “Chicago school” were shown to be successful in Chile, at the time a military dictatorship.

In extreme socialism, more commonly although perhaps erroneously called communism, the need for money pretty well falls away. The state apparatus basically requires everyone to work to the best of their ability in return for being provided what they need. In the sense of everyone being equal, a necessary corollary of pure socialism, a contradiction immediately arises, because those representing the state clearly have powers unavailable to everyone else. And in practice, people must be prevented from leaving else the state will lose a proportion of its most productive workers, tempted by wealth elsewhere. Democracy could exist, although it rarely has in practice.

All kinds of freedom of expression also disappear. There is no religion, no private ownership of property or the means of production, no right to oppose the government.

Protagonists state that “real communism hasn’t been tried”, by which they mean a truly equal society, with no leader, and everyone having equal power.In some ways it’s the ultimate democracy, so long as there are checks and balances in place to make sure no person or group is favoured over another. This may sound Utopian, but unless humans have evolved to a state of some kind of oneness with each other, there will always be competition between them, especially during times of scarcity. It’s also hard to see how innovation comes about as there is no reward for the innovator. The most communist countries tend to have found themselves held back economically and exist only through excessive repression, such as North Korea.

Many people acknowledge that both systems have at least something going for them, even if they are more comfortable towards one end of the spectrum or the other. In the UK, few on the capitalist end of the spectrum would wish to see the end of state pensions, the privatisation of roads and education becoming private and non-compulsory. Similarly, socialists tend to accept private ownership of property, the right to save and spend, and the availability of privately produced goods. So we end up with what might be called a market economy. Yet neither side ever seems to be happy.

Socialists are unhappy that capitalists use their wealth to buy property and charge them ever increasing rent, and buying up resources like access to healthcare. Capitalists are unhappy that taxes are taken from them and spent on whatever the government thinks they should be spent on, whether these are benefits to low or non-earners or subsidies to unproductive industries and services.

But as we’re a democracy, we can’t have pure capitalism. So capitalists can swallow that one for a start! And socialists can’t get smug, because if they want economic growth and a better standard of living they need to keep the capitalists sweet so they don’t all move to somewhere they’re more loved. The answer is simple.

It sounds like a bribe, but I consider it to be the cost of democracy. Capitalism should be allowed to flourish, but it should pay back some of its wealth to the nation, either directly to people or to the state to provide for its social policies. My own opinion is that a direct payment, in the form of a national dividend (cf Universal Beneficial Income) would suffice.

The form that the charge should take is open to debate. My own preference is a land value tax, with additional charges placed onto resource extraction and polluters, and basically anything that physically affects the nation. Others would prefer a corporation tax or a revenue tax.

In many ways, what I’m suggesting formalises what already happens. The trouble is, it’s never explained that way. It’s always a case of one side telling the other they’re wrong. I would love to hear Jeremy Corbyn say that the UK’s wealth creators should be encouraged with fewer regulations and that the nation thanks them for the part of the wealth they create that everyone can share. And I would like Theresa May (or a more right wing Conservative) to state that everyone in a wealthy country like the UK is equal under the law and are equal democratic stakeholders and consequently the payment they’ll receive is their right, not a benefit.

OK, semantics mostly. But only in the sense that our adversarial political system likes to maintain the current discourses because it suits them. Perhaps a more liberal centre party (the LibDems aren’t especially economically liberal) can pick up on this. But I doubt that will happen.

Democracy is perhaps our greatest achievement, whatever Friedman thinks. And we can have his free market economy. So long as voters want it. And to want it, they want to share in it. Friedman did, interestingly, state that Land Value Tax is the least bad tax.

« Life after employment, and why the blog ran dry!
Smoke and mirrors? Two-year degree plan to cut cost of tuition fees »