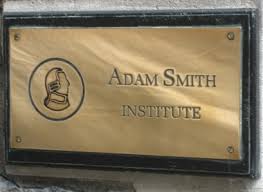 For those that don’t know, the Adam Smith Institute is a liberal free-market think-tank that takes its name from the Scottish economist famous for his work “The Wealth of Nations”. They believe in small government, free markets and low tax. This, they say, removes the country from constraints to economic growth and it alleviates poverty through making sure work always pays.

I have often critiqued the ASI in my posts, however I do agree with many of their ideas in principle. The paper Rebooting Britain was written by their President, Dr Madsen Pirie and is essentially a summing up of their position even before Brexit, which they supported. What follows are the parts I support, those I don’t, and those I positively object to.

The ASI proposes a much simplified tax system, which does away with transaction taxes and corporation tax. It sees a flat tax (i.e. everyone pays the same rate regardless of income) and a negative tax so that those below a threshold actually receive money, equivalent to today’s benefits.

Transaction taxes are objectionable because they tax the exchange of money, inhibiting trade. Such taxes include capital gains tax and stamp duty, which the ASI rightly states is a tax on moving home. The ASI also objects to inheritance tax, which I’m not so bothered about given that many people are now out of it and the rest can afford it. But the surprise is corporation tax. We have become accustomed to believe that large corporations should pay tax on their earnings, and there have been many stories about large corporations who have found ways of avoiding it. In fact taxing corporate profits means less money to employees and shareholders, who will in turn be taxed anyway. This especially applies to the highest earners who will no doubt be the main beneficiaries of reduced corporation tax but will likely pay that back to the treasury at a higher rate than would have been paid under CT. The USA, by comparison, has corporation tax as high as 35% and companies frequently locate subsidiaries or even their registered office outside of the USA to avoid these. The USA can’t afford to cut CT but in the UK we can certainly afford a cut to 15%, perhaps dropping it gradually to zero once the new taxed income starts appearing.

I have long been an advocate of a Land Value Tax. The ASI is too, although for the ASI it’s for local taxation whereas I see it as being for the state. My argument has been that the state is defender of the land and as property owners, our right to that property is granted by the state and as such it’s more of a lease than a divine right. Tax based on land value seems entirely reasonable and is a more effective way of redistributing the nation’s wealth than taxing income.

Unlike many right wing organisations, the ASI sees positives in immigration. Studies have shown that immigration adds to national wealth and, besides, immigrants to the UK collectively pay more in tax than they take in benefits. So what’s the problem? Well, the main problem is that if we stress-test the immigration thing and add, say, 100m people to the UK population then we’ll see quite a different country emerge from the one we currently inhabit. I can’t see people voting for that. But anti-immigration movements in the UK are more wrong if they think we can totally close our borders.

The idea of a federal government for the UK has to be the next step in UK constitutional change. We currently have MPs from all around the UK voting on policies, some of which only affect England. In fact Scottish MPs don’t even vote on Scottish policies, these being devolved to the Scottish government in Edinburgh. The ASI proposes an English parliament made up from MPs elected from English constituencies. This doesn’t resolve the Scottish situation, though, where different members vote on Scottish affairs to UK affairs. I would restrict English MPs to just English business and I would have a UK parliament elected separately, with fewer members than the current 650. Probably around 80-100, to set what is basically defence and international relations policy. In fact the upper (unelected) House of Lords can be abolished and replaced by this new UK body.

I am lukewarm on these ideas from the ASI. On housing, the basic proposition is to build more houses. That follows from the simple fact that housing supply hasn’t kept up with population growth. Consequently by the most basic law of economics, houses increase in value and the vested interest of politicians means doing nothing about it, apart from the ridiculous “help to buy” scheme to pump even more money into the demand side of the equation. I accept we need more houses, and I would like to see planning laws simplified and cheapened to encourage more self-build. The UK is unusual in the world in having much of its housing stock provided by building companies, who can afford the sums of money to develop large sites. But I also believe that when we have a scarce resource like land, nobody or no group of people should be allowed to monopolise it. And for that reason I support a land value tax, which isn’t designed to be punitive but to acknowledge that the land is for everyone and some of us are effectively leasing it from the rest of us.

The ASI’s idea about self-employment is predicated on their belief that employment laws such as minimum wage and employees’ rights are regressive and work against job creation. Dr Pirie also states that the government finds self-employment undesirable because it is harder to collect income tax from the self-employed than via PAYE where the tax is deducted before the employee even sees their salary. Much as I understand where the ASI is coming from on this, I don’t see it having enough support among most people, who like the stability and simplicity the current system provides.

Free banking is the other part of this grouping. Here, the ASI sees banks as money creators in their own right. This already happens under our reserve system, although it’s Bank of England money that commercial banks create rather than their own paper. The ASI envisages each bank printing its own notes. This might worry us for a number of reasons. Banks are not as safe as we once thought. 2008 demonstrated that. The government bailed out the banking system because not to do so would have spelled disaster for many people. In a free market, however, banks would be allowed to fail. And if the notes in my wallet have been issued by a bank that’s insolvent, would they be worth anything at all? Frankly I’d rather take my chances with Bitcoin.

These are where the ASI are, I believe, wrong. George Osborne wanted to change pension taxation from being tax free on the way in and taxed on the way out, to the reverse. So all pension savings would be on income that’s already been taxed. We might argue it amounts to the same thing. But for me it’s about trust. I simply don’t trust a future government not to change the rules and tax me on the way out too! The current method works well and although the 25% tax free sum is generous, what we have is more of a tax deferral than a tax-free scheme. The attraction to George Osborne would be that his tax income would rise in the short term allowing him to wipe out the deficit, at the expense of longer term tax receipts, of course.

Schooling and health for me come under the same heading. Because what ASI proposes is a free market in both. Rather than the state providing education and healthcare directly, the latter being the NHS in the UK, service users (which is what we will be) would receive a sum of money to spend at a chosen school or surgery/hospital. Again we should be worried. Because once the government starts thinking of this in terms of money, we can be sure that there will be downward pressure on that money as successive chancellors cut budgets. At least with the current system the government has to find money to pay for the education and healthcare we need, no matter how much we complain about it. We should also be worried because the current systems were set up to educate and care for the whole population rather than being somehow arbitrary depending on means. Universal schooling was deemed necessary not for the good of the child but for the nation. That is still the case.

The ASI represents a set of values which they believe to be “good”. By that they mean freedom to make money and spend it how a person pleases, rather than a government. But these aren’t everyone’s values. Many people prefer a cohesive society bounded by a common purpose, carried out by a democratically elected government. This means that state enterprises like the NHS and the education system exist for the common good. Many people don’t want to have to choose a school or hospital. They want to to go the most convenient establishment, which they expect to be of a minimum standard. Similarly with employment. Not everyone wants to be self-employed, running themselves as separate businesses.

So while I tend to support the ASI’s ideas on things like tax and government, there’s a huge gulf between their social proposals and what I would be comfortable with.

« Young suffer as pensioners continue to prosper, says IFS
What is Bitcoin really worth? »