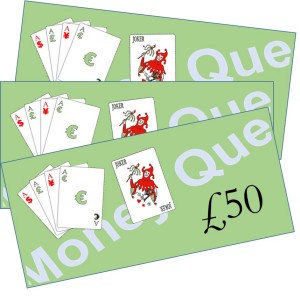 Christmas is a time of year for retailers to be happy. Why? Because we like to buy their gift tokens!

Who hasn’t ever bought or received a gift token? It’s an easy gift for someone, whether in its old paper form, as a swipe card or in its modern digital voucher code format. Depending on how old you are, you might remember when you opened your Christmas card and shook it to see if a gift token fell out. And you would be happy to see 5 shillings, 50p or 5 pounds on a small piece of paper or card, with perhaps some disappointment that it has to be used to buy a book or clothing or something else you might not want. As I say, it depends how old you are, and what constituted a gift.

But the main winners are the retailers. In 2012, these gift tokens collectively raised around £4bn per year in the UK. Doubtless the sales peak in December. What’s more unfortunate (but not for the retailers) is that some £300m is never spent. That was the 2014 figure, up from £250m in 2012. A free gift to the retail sector.

If gift tokens were financial instruments, like shares or bonds, how could they be described? We might call them non-interest bearing unsecured bearer bonds with put options to redeem at par value and option on the part of the issuer to offer goods in lieu of payment. That’s all a bit of a mouthful, so let’s break it down.

Unlike most cash instruments, other than cash itself as notes and coins, gift tokens don’t pay interest. At present, National Savings Certificates pay 0.9% interest per year over two years, or 1.6% for a five year term. They sound like much better value! Other non-interest bearing certificates exist, such as zero-dividend preference shares, but these are likely to be issued at a discount to their par value. So whilst they might be redeemable at £100, you pay perhaps £95 for them a couple of years earlier. Gift tokens give no return no your cash, and are best redeemed as soon as possible.

Generally in the market place, secured loans (like mortgages) attract lower interest rates than unsecured loans (like personal and payday loans). Quite simply, the loan is less risky if you know that you can get your hands on an asset if the borrower can’t pay than when you have no rights over the borrower’s assets. Why then do we provide an unsecured loan to a retailer and take all of the risk of them not paying us back?

First, it’s not really a loan. Gift tokens amount to the same thing as loans, because the retailer is borrowing money from us in the form of an up-front payment for goods yet to be bought. Second, and more importantly, the lenders – the buyers of the gift tokens – take all the risk that the loan won’t be repaid. It’s as unsecured as you can get. If the retailer goes insolvent and stops trading, you are unlikely to be able to exchange your gift tokens for anything. If you think that’s unlikely, then take a look at this list. What are your Woolworth, Comet or JJB Sports gift tokens worth now? Gift tokens risk becoming worthless if a retailer goes bust, and are best redeemed as soon as possible.

Simply this means that there is no record of who owns the gift tokens. The only person sure of their ownership is the owner. Actually, with the advent of electronic gift tokens, there will be centralised records. But that doesn’t stop someone else looking at your email and using the code for their own benefit. But generally speaking, you loose your gift tokens and they’re gone. Another good reason to redeem them as soon as possible.

Another difference between bonds and gift tokens, and possibly the only good one, is that gift tokens can be “put” whenever the bearer chooses. Bonds generally mature on a specified date. So in this instance, retailers won’t say that you have to wait until November 2021 before redeeming your gift tokens. There is a growing trend now, though, for gift tokens to have a use-by date. This is a particularly nasty condition, because after that date they are worth precisely nothing. Otherwise, you redeem them whenever you like. A good time to do that is as soon as possible.

As is often stated explicitly, gift tokens cannot be exchanged for cash, only goods. Some do, however offer change in the form of cash and with less sophisticated gift tokens, you can always buy your goods and then take them back to the shop if the shop kindly offers cash returns. But in all cases, the retailer has no compulsion to offer any cash at all. Given that goods tend to rise in value, it’s best to redeem gift tokens as soon as possible.

Is it always best to redeem gift tokens as soon as possible?

Well, yes. Unless prices are falling, that is. Deflation can happen, however, and some might say we’re teetering on the edge of deflation as I write. But even so, deflation doesn’t necessarily lead to falling prices. And falling prices doesn’t necessarily mean deflation. (Technically, deflation means that money is being taken out of circulation, and falling prices is but one likely consequence). Some goods tend to fall in price anyway. That new phone you saw before Christmas might be available at a discount come March.

But falling prices really just mean that it’s better value buying anything later rather than right away and has nothing to do with gift tokens in particular. You are still better off holding the equivalent amount in cash where it can collect interest and you don’t run the risk of the retailer shutting up shop. Curiously, the interest argument is also rather weak of late. Rates are close to zero, and in some countries are actually negative. Central banks would like us to have a digital currency rather than notes and coins so they can impose negative interest rates on us. Perhaps if notes and coins were to disappear, we could stuff our gift tokens under the mattress? But that is some years away, if ever.

So a very Happy Christmas from Money Questioner. I hope you all find some good old-fashioned things to do this Christmas like spending time with people you like, and getting out and about rather than reading blogs. And if you do get a stocking full of gift tokens, and you haven’t read the rest of this blog, it’s best to redeem them as soon as possible. The Sales are always good for that!

« NHS funding – what options are there?
Major economic themes in 2016 »