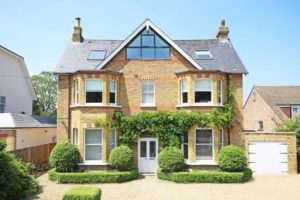 The government will find an extra £10bn for the Help to Buy scheme to let another 135,000 people get on the property ladder, Theresa May has said.

The extra cash will help buyers get a mortgage with a deposit of as little as 5% to buy newly built homes.
Mrs May gave no detail about the source of the funding and said plans would be outlined in the Budget on 22 November.
But think tank the Adam Smith Institute criticised the revival of the scheme, saying it would push up house prices.
The prime minister confirmed the extra funding on BBC1’s Andrew Marr Show as the Conservative party conference begins in Manchester.

Helping more people to buy their first home is part of a Conservative push to win back younger voters, many of whom have switched to Labour under Jeremy Corbyn.

Home ownership has fallen in recent years, with 62.9% of the estimated 22.8m households in England being owner-occupiers in 2015-16, the Department for Communities and Local Government found. That is down from 70.9% in 2003.

Just 20% of those aged 25 own a property, compared with 46% two decades ago, according to the Local Government Association. Almost half of those aged 24 to 34 in England pay rent to a private landlord.

Who gains, who loses?

Apart from house prices. It’s arguable whether Help to Buy causes real house price inflation, or whether it simply brings forward supply of new builds through increased demand. However, basic economic theory suggests that if the housing market really were free then without Help to Buy, such undeveloped land would fall in value and house prices should also fall. Why doesn’t that happen?

Quite simply, housing and land are not free markets. Developers own plenty of land but they are in no great rush to build on it so long as land prices rise. Put more simply, they make more money sitting on land watching its value increase than they do by building a house on it and selling the house. Help to Buy effectively pays the ransom money to release that land.

So we end up with what’s effectively a subsidy to house builders, a cost to taxpayers, and a small number of young new home buyers with a not insubstantial amount of debt to pay off.

And we have a probable increase in house prices, as £10bn is channelled into the housing market.

The Adam Smith Institute’s Sam Bowman was quick to criticise the extension to Help to Buy. He points out that the limited supply of new houses is the result of NIMBYism, and with permission to build new homes on green field sites, as well as to increase housing density in cities, house prices can be made more affordable through increased supply. This would be the free market approach.

My own piece on house prices concluded that the government should build more council homes. However this was mostly aimed at increasing supply on the rental side of the equation rather than the buy side, coupled with the government being the largest participant in the rental market through housing benefit. Either way, the answer is more houses.

The counter-argument to more houses is that people already live somewhere. So it’s not the housing stock that’s the problem but the ownership of it. Increasing the housing stock might do nothing more than increase the number of people with second homes, as newly empty rental properties hit the housing market at unaffordable prices, with existing home owners also able to shuffle around, buying houses closer to their work, while freeing up houses further from the cities.

A conspiracy theory in all of this is that the £10bn is a covert subsidy to house builders, allowing them to capitalise their gains in their property speculations.

I conclude that Help to Buy helps too few people and actually causes more harm than good. The consequent inflation (or lack of deflation) leaves houses still too far out of reach for most people, for whom affordable rent is the issue. While some trickle-down might happen, Help to Buy is unlikely to be as effective to people on low incomes as other interventions like rent controls and higher taxes on homes and/or land. Which brings me back to land value tax. If ever there was a way of correcting the imbalance between those who own land, and consequently homes, and those who don’t then this is surely it.

« UK pension reform – what happens next?
Why new council housing is right for the UK »